The common thread today was the floodplain of the Murray River, where the red gums towered majestically in unusual shapes, depending on the way the floodwaters had shaped them. Sunlight filtered and gleamed on the trunks. 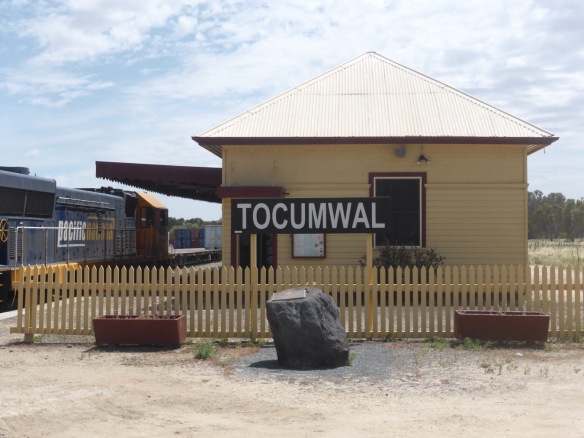 The township of Tocumwal had been bypassed by passenger trains but the Lions members served us a classic morning tea in the station staff room. Meanwhile, a modern diesel locomotive engine stood ready to cart containers across the river and down to Port Melbourne. 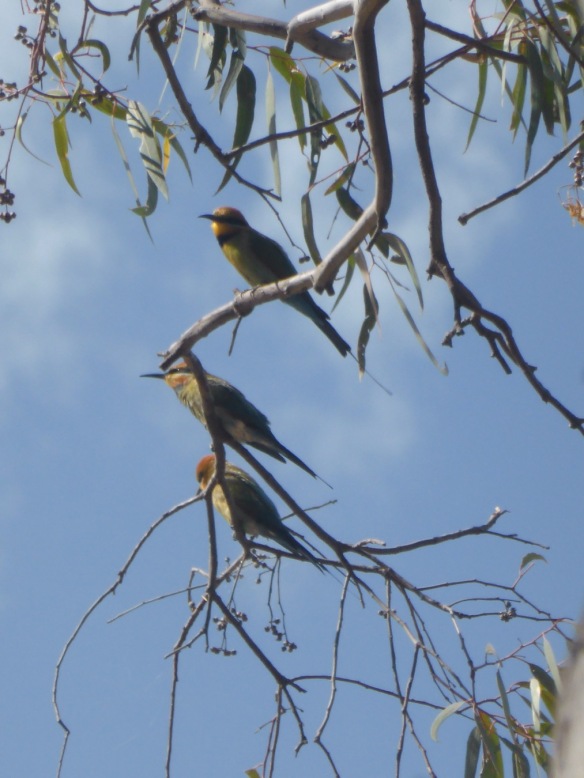 Rainbow bee eaters fluttered high in the red gums, catching insects. Three paused briefly on a branch and I managed to zoom in on their vivid colours. 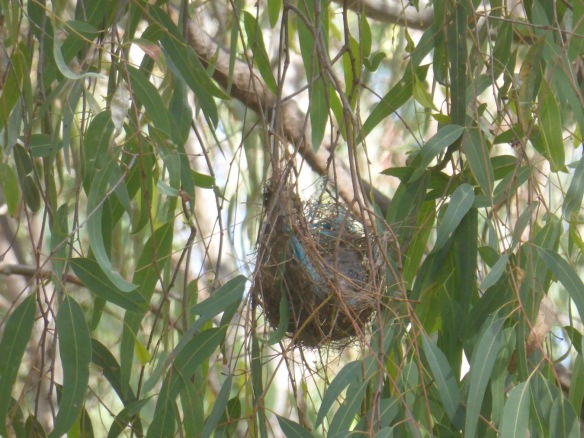 From a bird hide on Quinn Island, we observed a friar bird attending to its nest, suspended in the shape of a Viking ship and tastefully decorated with blue twine. 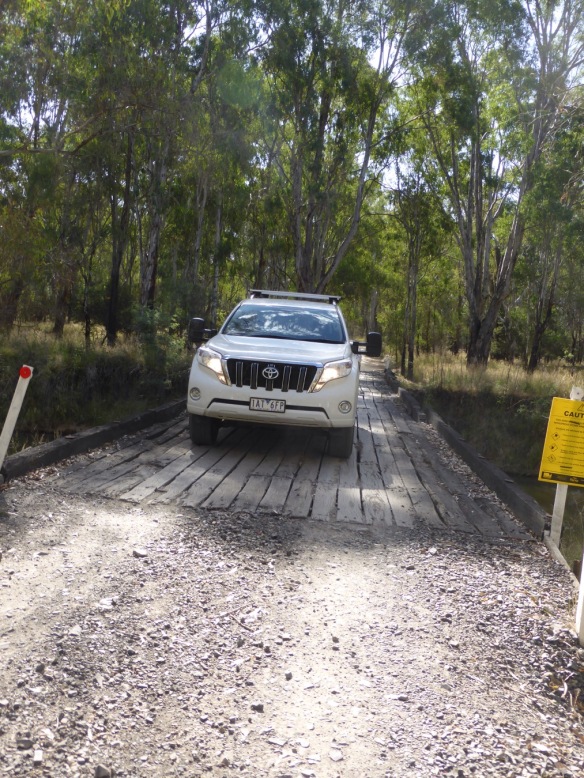 Further upstream, we came upon a narrow bridge with a three-tonne load limit. David assured me that the Prado weighs only two tonnes, so we were all right. We carefully eased the 4WD over the wobbly planks to the other side. 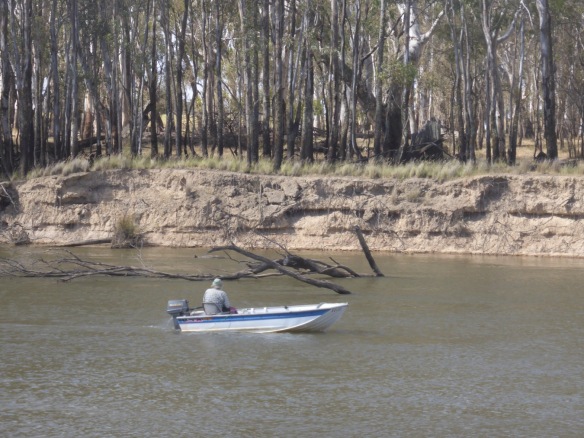 It was the first day of the fishing season and fishers in little tinnies were trying their luck for Murray cod.

Kookaburras kept an eye out for edible movement. A platypus wriggled its flat tail in the snags near the riverbank, but I wasn’t quick enough to capture them on record. All about was spring activity. 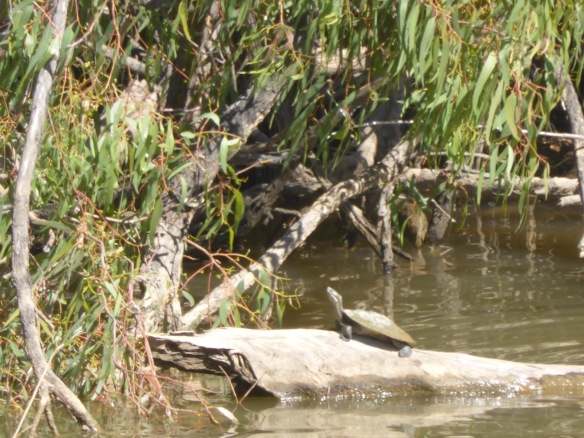 A short-necked turtle ignored us as we tootled by, heading upstream on the paddle boat Cobba.

Riverboats don’t need a wooden helm these days. The skipper of the Cobba uses a remote control. A diesel engine drives a generator that powers each paddle wheel separately, so each paddle can be controlled independently, at different speeds or direction.

The Cobba paddle boat moored at beach on River Murray, Cobram. The Murray is Australia’s longest river system, defining some of the boundary between the states of Victoria and New South Wales and finally emptying into Bass Strait in South Australia.

A pleasant cruise from Cobram up the Murray River took us under a historic drawbridge, past houseboats, then alongside an island sanctuary where koalas looked down at us from red gums above century old post-and-rail fences. 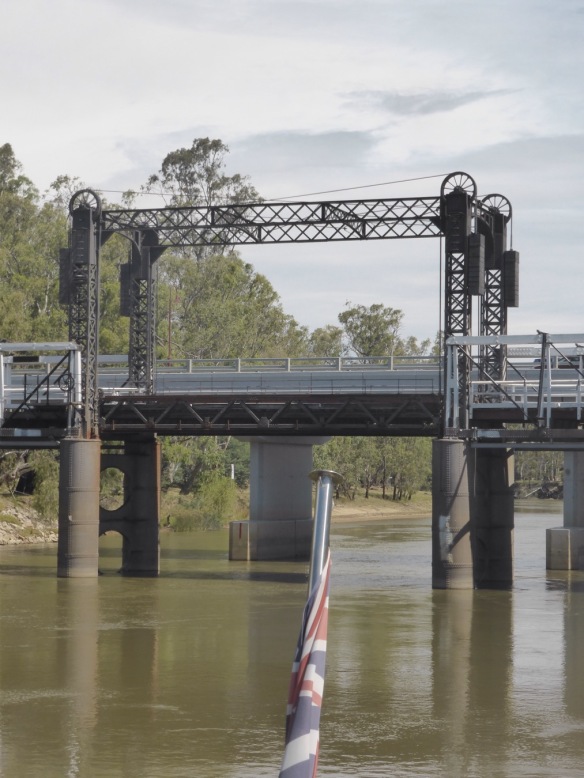 Disused drawbridge on River Murray, built in the days of paddle steamers and sailing boats.

Koala in red gum on Quinn Island, now a sanctuary. 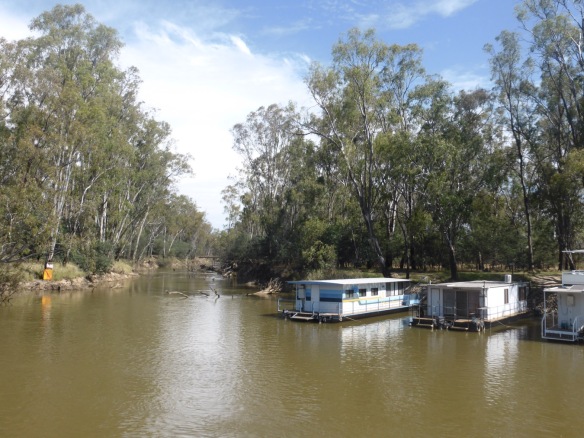 Houseboats moored at the anabranch at the end of Quinn Island.

Today we crossed the Murray River three times: at Morgan, Cadell and Waikerie – just for fun. The third time we were behind a farmer with two sheep in a trailer behind his vehicle. We stopped for a look at Lock 2, where pelicans and cormorants waited for fish. At dusk, we wandered among river mud and dead trees. 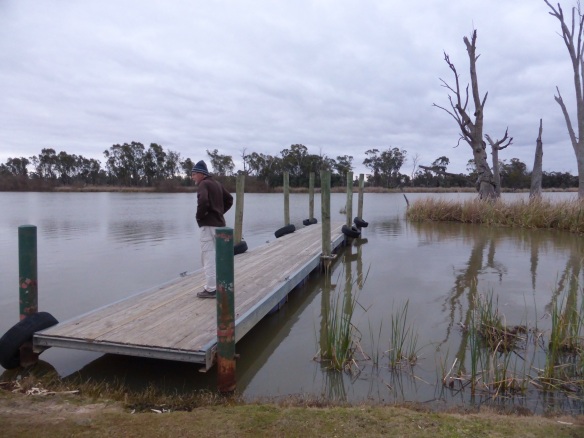 Swan Hill, on Australia’s mighty River Murray was home to paddle steamers and you can experience life in the nineteenth century at the Pioneer Settlement. At night, you can travel round the settlement and listen to stories and a light show. It costs Seniors $32 for the package. 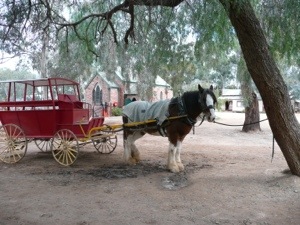 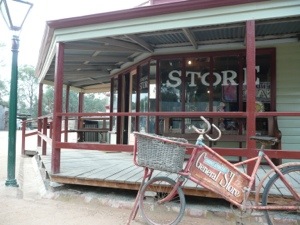 For the first time, we are part of the annual Australian “grey nomad” migration – moving from the chilly south in search of sunshine. Our van was dwarfed by huge B-double trucks on the highway. When they rushed past in the opposite direction, the backdraft pushed our extended mirrors backwards. First night was at Swan Hill on the Murray, Australia’s longest river. The Murray River provided an essential transport link to the inland in the nineteenth century, as paddle steamers carried wool south and supplies north-east. An evening riverside walk provided an opportunity to photograph the historic split bridge which opened to allow tall riverboats through.

What was posted when